The screenplay for “The Lies People Tell” details a fraudulent funeral home that provides fake ashes to the bereaved it serves and profits from the bodies they don’t burn, selling them on to the black market.

Logline: A fraudulent funeral home provides fake ashes and profits from the bodies they don’t burn.

Tagline: Most of us fight for our better natured side to prevail, but not everyone.

Synopsis: Khalil Honert runs Honert’s Funeral Home and Crematorium in Calgary, Alberta. Externally it resembles any other home; a tranquil space intended to help ease people through the tribulations life brings. In reality it’s a front for a considerably more reprehensible trade; selling the bodies it agrees to shelter and take care of.

During a tumultuous financial period, an associate of Khalil’s afforded the home the option of staying afloat by shifting to this trade. His associate, Ronald Robinson (or “Ron Rob” as he’s best known locally), loaned Khalil the money in return for the home deceiving the recently bereaved into the resale of their cadavers to underground markets. From helping beginner surgeons learn how the human body functions through plastic surgeons and tattooists to rich degenerates wanting to perform unreasonable acts.

This consistent cash flow has afforded Khalil and his wife a way of life they would never have conventionally accomplished and has raised their staff to comparable levels of wealth. Instead of incinerate the bodies they get, they put present an elaborate show giving a combination of solid powder and ground remains to the bereaved. As the remains seem real, no one assumes anything untoward. And once the coffins are closed, no one second guesses if the body inside is their beloved.

The Behind “The Lies People Tell” screenplay post should provide more information for you. If you’re interested, of course.

Life is hard. We all like to pretend things are easier than they are, but the truth is that they’re just lies we tell ourselves to endure the daily stresses of life. Most of us try to make things tolerable for each other and aren’t just focused on our bank balances.

Some of us, however, would prefer that we just gain all the wealth possible and from to hell with whoever gets in the way.

Ronald “Ron Rob” Robinson fits this description perfectly. Hellbent on profiting, he convinced Khalil to perform the unthinkable in exchange for the almighty dollar and helped him escape his debts by misusing Calgarians’ trust.

Honert’s Funeral Home and Crematorium has been in Khalil’s family for many years and it’s unthinkable for Khalil to lose it. It’s the family legacy; helping those at their most vulnerable. And so he caved under the temptation of arguably easy money by helping Ron Rob.

Now, with pressures mounting, he’s faced with the very real prospects of facing the consequences for his reprehensible actions. However his “business partner” isn’t as amenable to the prospect of him simply reverting to their legal ways.

“The Lies People Tell” explores the pressures put upon Khalil and Julia-Shea, the soon to be parents of twins and their attempts to turn their lives around, despite who they’re in bed with (business wise, of course). It shows how the mistakes you make can compound themselves and how easy it isn’t to get yourself out of such a mess.

Great for fans of darker material. If you’re looking for princesses, pink and positivity. This might not be your favourite tale. 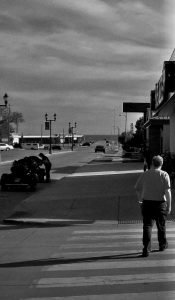 The screenplay for "The Lies People Tell" details a fraudulent funeral home that provides fake ashes to the bereaved it serves and profits from the bodies they don't burn, selling them on to the black market.

There are no reviews yet.